D-Controls Plus
Not only an app for KNX smart system
How does it work?
D-Controls Plus is a smart home system controlling software applied on mobile phones. Through D-Controls Cloud, it controls the smart home which is connected to D-Controls series KNX.

D-Controls series KNX, equipped with industrial grade CPU and RAM, is able to work 24-hour so to deliver the real time communication of the smart system to the cloud server, by which the info is calculated, analyzed, encrypted and then transferred to the corresponding Plus App.The order made by the user on the mobile will be delivered
to cloud server in the same way via 3G/4G network and then sent to the corresponding KNX. With D-Controls Cloud and KNX, the Plus App could realize the remote control of the smart home system.

This program is totally different from the remote program with dynamic DNS techniques. It has no requirement for network configuration. Furthermore, it also has such features as prompt control, stable status, safe data usage and communication friendly with multi-layer routers. The user could easily control the home system remotely by logging into the account.
What can it do?
D-Controls Plus functions to almost all electrical items available in the market. Take home appliances as example, it could control lighting, HVAC, vacuum machine, curtain, sunshade, TV, sound system and amplifier, beamer, doors and windows, water valve and pump and etc. It is able to read CCTV images, security alarms, in-/outdoor temperatures and the info from environmental sensors, such as PM 2.5, rainfall, light intensity, number of people, smog, hazardous gas, and CCTV videos. The above mentioned items could be controlled manually by user or automatically based on scenario setup. With D-Controls KNX IC2, the items could even be controlled intellectually which is now only possible in the movie.
One of our clients realizes agriculture automation with D-Controls Plus. It could monitor the growing situation of the plants, adjust the light, temperature and humidity automatically. Imagine that simply with mobile phones, you could take care of each plant on the 10,000-sqm land. That is cool! That is D-Controls Plus, beyond the imagination!
Amazing user experience

D-Controls Plus, an independent APP run in both iOS and Android system, enables millisecond speed for control and reaction under 2G network. It could insure the fluent user experience even when it’s loading several ultra-high resolution pictures at a time.

If you have ever used controlling software based on WEB framework, you would expect some stuck when changing the image-integrated interfaces. It happens even under LAN or similar high speed networks, let along under remote circumstance.

The default interface of D-Controls Plus is flat and simple, but so accurate and delicate that it’s especially suitable for retina screens.
Custom-made interface

D-Controls series APP emphasizes the custom-made setup by the users; while Plus has it strengthened. Even without manual, users could custom-made the interfaces following specific VI by only half a day. In other words, the users can receive extraordinary visual effect with very simple set-up. More splendid visions are available if the 3D files are input into Plus.
* possible to set up Logo and colors
* possible to change background pictures
* possible to input 3D files
* possible to custom-made floor layout, rooms and widgets.
Tell you if something’s up

The latest technique of D-Controls Plus enables the users the real-time monitoring. Such information as the AC/lighting is on, the window is open, or there is smoke would be sent to the users’ mobile phone in no time.
Together with D-Controls KNX IC2, the Plus would be more intelligent. For instance, it could check if any window is still open based on the weather and inform the users immediately. When it’s permitted by the users, it could close the windows automatically under the same situation.
Cloud service

D-Controls Cloud undertakes the tasks such as remote communication, user management, data storage as well as data analysis.
The back-up function for instance, enables the users to store the debugging file and the custom-made set-ups. The engineers could handle the projects remotely; and the users are free from any dangers caused by losing the mobile phones.
Once logging in the account on other mobile phones, the APP in the lost phone will be log out and turned off automatically. Meanwhile, the APP in the new phone would restore the back-ups.
More functions of D-Controls Cloud will come soon.
Remote control

Previously it’s only possible to control the smart home remotely with the routers programmed and debugged by engineers. Once the router is restarted, it can’t be set-up by users directly.
Nowadays D-Controls Plus, with the latest techniques, enables the users to remotely control home directly when they use the APP; even the KNX is set under multi-layer routers. The routers are no longer responsible for complicated communication. Therefore the remote control is more stable and safe.
Based on the mentioned technique, even if your wife is not at home, she can control the home system by scanning the QR code sent by you.
Management system 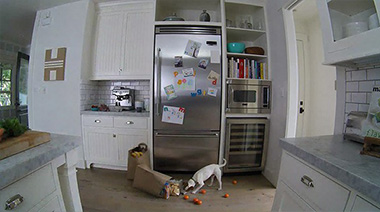 D-Controls is able to create the atmosphere of home and thus give you a good mood
Romantic mood: at the dinner table of a wedding anniversary, there is the dark pink light with the twinkling star light and soft music.
Happy mood: at the baby’s birthday party, once the candle is blown off, the light is automatically on and the cheering tune is heard.
Exciting mood: D-Controls Plus could change your living room to home theater, party place or library..
All of these is realized by the complex mix of the color and brightness of the lights, the AV system as well as the AC appliances. It’s just more than the words can say.
D-Controls KNX IC1 (Control center)

D-Controls KNX IC1 is a standard part for D-Controls Plus system. It contains the complete KNX communication protocol stack and the industrial grade CPU. With integrated remote communication protocol, it’s able to communicate with D-Controls cloud server even under multi-layer routers. IC1 could be seamlessly connected with standard KNX modules from Simens, Schneider, ABB, GIRA, JUNG, and Haige. The custom-made IC1 could be communicated with intelligent system such as Zigbee or Modbus. The IC1 is installed on the standard 35mm rail with the width about 4 modular. 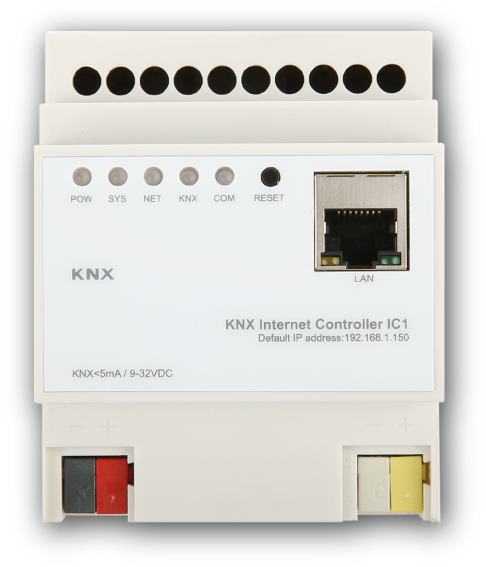 D-Controls KNX IC2 is the upgraded part for D-Controls Plus system. In addition to all functions IC1 has, IC2 also enables time scenario and logic scenario. Its CPU is five times faster than IC1. The time and logic conditions could be set in the interface, saved in IC2 and run without stop. The set-up interface of Plus is user friendly. Normal users could reach the same effect as professional engineers do. For example,” if there is no body in the room, please turn off all the lights and AC”. The IC2 is installed on the standard 35mm rail with the width about 6 modular.